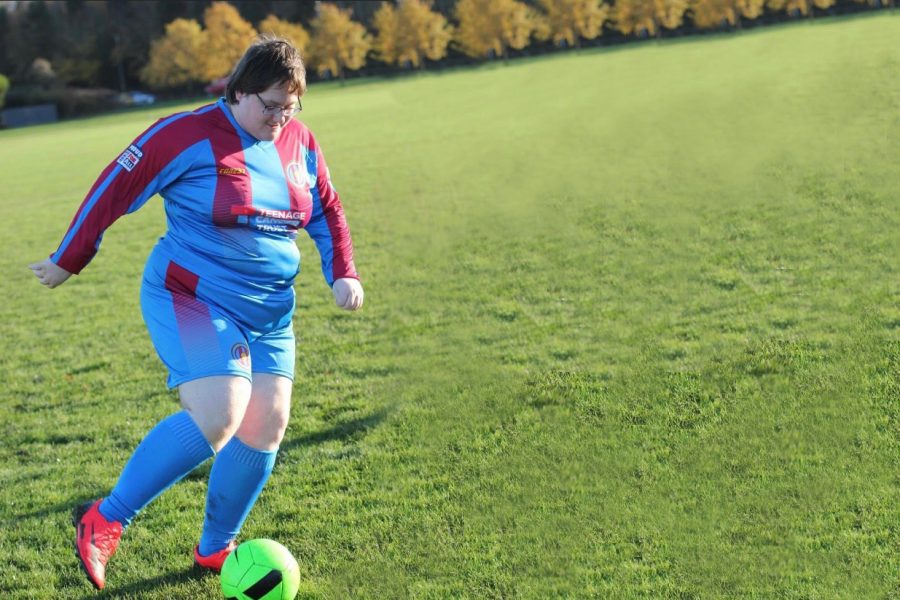 “I would highly recommend people play football as it has helped me in the past. When I play I feel happy and confident in myself, I only think about what is happening in the match and nothing else. When we play matches I like to play as a striker. It’s OK playing in goal – but I prefer to be further up the pitch.”

Lucy came to Bridge in October 2020, she is from Blyth, and is football mad – she lives for the game.

Lucy asked her Bridge worker, Sheena, if she could tell everyone how keeping active is good for your mental health and how much sport has helped her.

Lucy says that keeping active makes her happy. Sport has helped her deal with stress and anxiety and her social life has improved too. Being part of the team meeting up before and after a match has enabled her to make loads of new friends. Lucy trains and plays weekly for the Cramlington Leopards, a mixed football team, having been promoted from the Jaguars for the start of this season.

Lucy says, “I would highly recommend people play football as it has helped me in the past. When I play I feel happy and confident in myself, I only think about what is happening in the match and nothing else. When we play matches I like to play as a striker. It’s OK playing in goal – but I prefer to be further up the pitch.”

Now its matches each weekend but she still has time to get to St James’ Park as a Newcastle United season ticket holder.

“I like the rivalry between teams and their support and the banter I have with friends and family. Through football I get to see friends and play against them”, Lucy says.

Lucy has even got Sheena down to watch a match. Sheena said, “It was great to watch Lucy play, I was really impressed and it was great to see how she’s using her new skills and confidence on the pitch”.

Sheena has been working Lucy on life coaching and helping her develop confidence and build her independence. Also, with her Bridge Connector Natalie, Lucy has been out and about visiting new places and building on the friendships she has made in the team.

Lucy says her happiness and well-being has improved through keeping active and she recommends to everyone the benefits of sport for your mental health.

Lucy has been making great progress with Bridge and we hope she gets a hatful of goals this season!