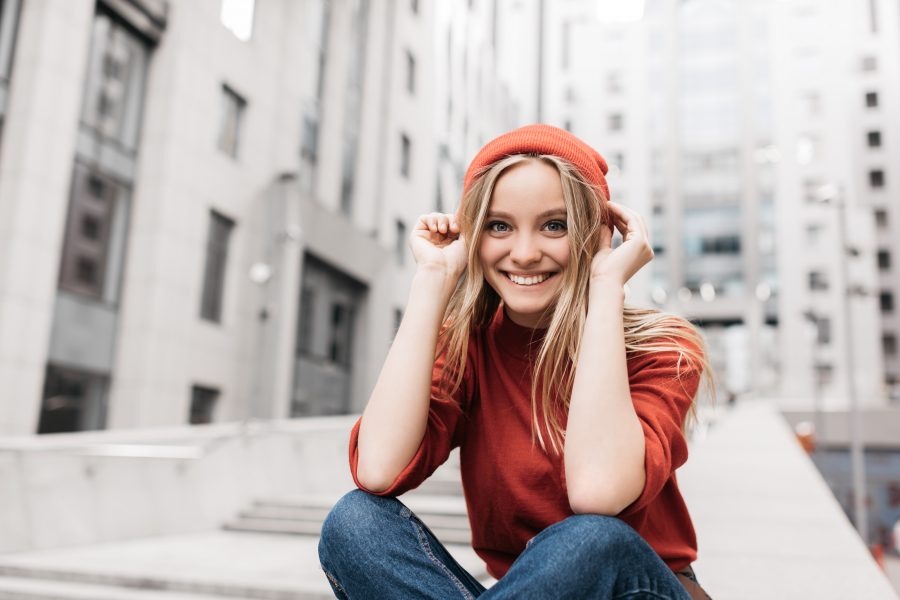 Poppy is a FABULOUS example of what Bridge can achieve with the determination and drive.

Poppy, 24 from Hexham joined Bridge Northumberland for support in Feb 2021 being referred after a visit to her GP and speaking with the Social Prescriber at the surgery.

Poppy left university in 2018 after completing a HR Business degree, and found work in the family business until it was sold in May 2019. Becoming unemployed triggered past anxiety and mental wellbeing issues for Poppy which were further impacted by the pandemic and the numerous lockdowns. Poppy became increasingly agoraphobic and even the simplest of day to day things were impossible for her to do, she never left her home. The situation continued for months until in Feb 2021 Poppy decided enough was enough and she went to her GP to ask for help.

The GP referred her to the clinics Social Prescriber Alex, who was able to give Poppy time to explain her difficulties and work with her in finding different solutions to support her. Alex suggested Poppy join Bridge Northumberland to assist her in her journey to finding work.

On joining Poppy met with Sheena her Bridge Worker. It was evident to Sheena that Poppy had skills and abilities and a degree but she really needed to rebuild her confidence before looking for work. After the financial assessment was completed with Northumberland Citizens Advice, Sheena started with arranging coaching sessions weekly with Cygnus Support.

Poppy says the coaching sessions with Cygnus were different to mental health support she had had previously, Cygnus really listened and focused it all about you. The regular sessions helped Poppy rebuild her confidence to the point she felt able to start a volunteering role when Sheena suggested it in May.

Working with Lisa at Northumberland CVA Poppy started volunteering weekly with Full Circle Food Project, in a admin role. A job and tasks she was familiar with and able to do. The weekly sessions really helped rebuild Poppy’s confidence and then she progressed into volunteering at Children’s cooking classes, at Full Circle.

In July Sheena suggested Poppy start the Skills U Need course run by Northumberland CVA, the course covers writing the perfect CV, carrying out effective job searches, complete application forms and learn how to be successful at interview. The training also helps participants prepare for work and manage on a budget. Poppy was happy to attend the weekly course to support herself in searching for work.

In August at one of the weekly sessions at Skills U Need, Michelle the course tutor told Poppy of a job opportunity that was being advertised at Northumberland CVA. Michelle suggested she apply for the job as she had all the skills and experience the role required. Poppy put in an application and soon heard she had an interview in early September. The interview went well and Poppy was delighted when she was offered the role of Receptionist & Admin Assistant at Northumberland CVA. Poppy accepted and started her new job in Oct.

Sarah at Full Circle Food Project says: “Poppy was quite nervous coming to us initially as an Admin. Volunteer, but she had all of the intelligence and skills that helped us. She gradually developed confidence that meant that she not only helped in the office, but also helped with children’s cooking classes as well. We are so pleased that she has got the job she deserves, but we will certainly miss her! “

The decisive action taken back in February 2021 to where she is now 8 months later, Poppy has succeeded by being driven and determined to improve her life and make lasting changes. She has taken all the support and help on offer to enable her to reach her goal.

Poppy says: “You can’t change until you do it yourself!”

Sheena says of Poppy’s journey: “Poppy is a FABULOUS example of what Bridge can achieve with the determination and drive. Poppy was lacking confidence and felt far-removed from the job market, but with the support of Bridge and The Full Circle Food Project, together with her hard work and motivation, she has succeeded in securing a great new role and we are all so proud.”