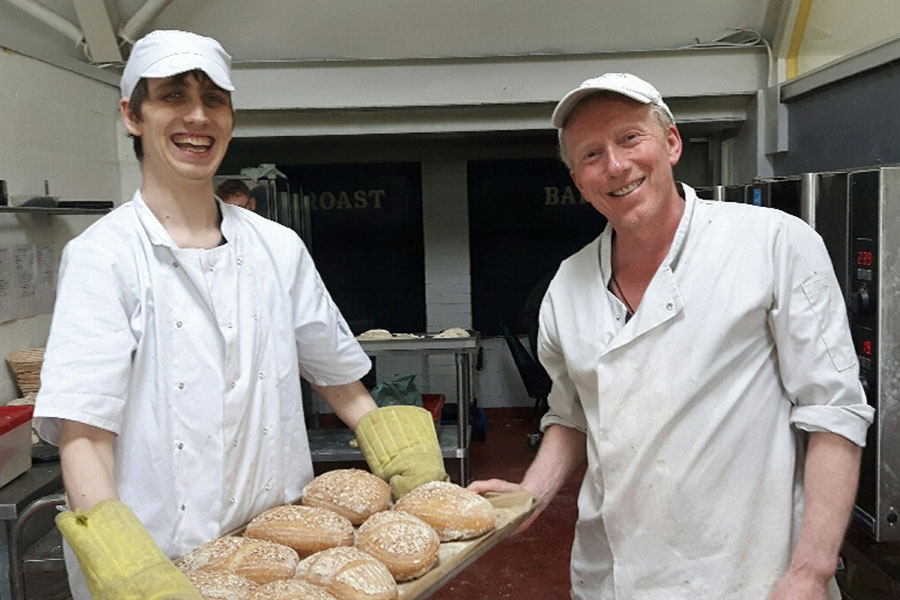 When we first met Daniel he was very anxious, in particular around leaving his home environment. He felt he would like to contribute and be more productive in life and indicated to his Bridge Worker, Garry, that he feels he wanted to do something with his life.  After an initial assessment, we enlisted the support of BRIC, another Bridge Partner who created a plan of support where he began an intensive training programme around word processing and internet safety.

Further discussions with Daniel around what he wanted to do resulted in referring him for a volunteering opportunity through the Supported Volunteering programme with Northumberland CVA, who along with the support of a Volunteer Buddy started attending the Artisan Baking Community for 3 hours a week.

During his placement with Artisan Daniel has learnt to produce his own bread. He has learnt how to; mix the ingredients, knead and fold the dough, cut it into a rough shape, weigh it accurately before kneading it again, then folding it to form the required shape ready for proving, then it’s baked to perfection!  Daniel is very proud of what he has achieved at the Bakery and loves every minute of it – he is pictured here (left) with owner of the Artisan Baking Community, Andy Haddon.

Daniel has now been going to the bakery for the past 2 months and has also attended 14 sessions at his tailored IT course with BRIC – fantastic achievements given his initial reluctance to leave the house.  His confidence levels have increased ten fold in the past few months and his parents are really proud of what he is achieving.  Daniel doesn’t cook for himself, so we also gave him some basic skills and he learnt how to use a microwave, something most of us take for granted…

Daniel has listened, learned and produced his own bread. He has learnt how to; mix the ingredients, knead and fold the dough, cut it into a rough shape, weigh it accurately before kneading it again, then folding it to form the required shape ready for proving, then it’s baked to perfection!

What’s next for Daniel?

Consent has been obtained by Daniel to use his information and images in this story.